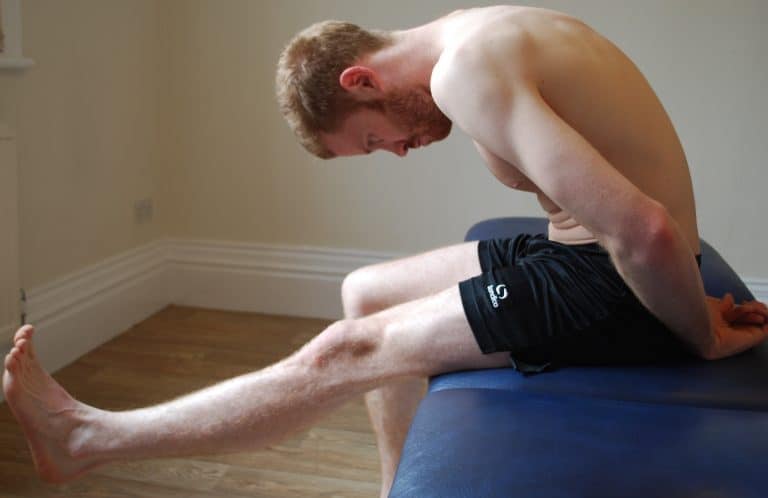 This patient had a few weeks history of left hamstring tightness. No trauma, and never an ‘ouch moment’ when he felt something happen.

Prolonged periods of sitting seemed to irritate things for a short while, but once up and moving it would seem to free off.

With the hamstring muscles point of attachment being on the sitting bone, at the bottom of the pelvis, there can often be involvement of the pelvis/lower back in hamstring issues. This should often therefore be the starting point for assessment.

With the assistance of the patient’s girlfriend, we first assessed leg length and checked for any dysfunction through the pelvis. There are two types of leg length:

We then assessed the lower back for tightness/stiffness.

We then assessed the hamstring itself. By demonstrating on myself I taught the patients partner to perform two simple hamstring stretches, to stress different parts of the three hamstring muscles. There was no pain, just the general feeling of more tightness on the left.

Using a similar method of instruction, we then went through a number of resisted tests for the hamstring muscles to rule out strain/tear, again testing different parts of the hamstring. Again, no pain. This ruled out the hamstring as the cause of the patient’s symptoms….

With an upslip of the pelvis a number of surrounding ligaments and muscles can potentially tighten up and ‘hold’ the pelvis in this altered position, commonly the lower back muscles, the deep glute muscles and a ligament connecting the sacrum bone to the pelvic bone……as the graphic below shows.

As these tissues tighten, they can restrict around surrounding nerves, especially the big sciatic nerve (the yellow bit in the picture) which has to weave and wind its way through these muscles to then travel down the back of the leg. When we are walking and running nerves need to be able to ‘slide’ and ‘glide’ freely through these structures to function normally. If the nerve becomes restricted by the neary-by structures it will behave in a dysfunctional way. This if often largely associated with with tingling, pins and needles, and numbness. However, something often experienced in athletes is this feeling of tightness, not a muscular tightness, but neural tightness, which simple stretching will not resolve.

To assess this, we performed what is known as the ‘slump test’ to test the mobility of the sciatic nerve.

I instructed the patient into the correct position to perform the test, whilst sitting on the edge of a bed, comparing left and right, and providing feedback on what he felt. The left felt a lot more intense and was felt through the glutes and outer hip rather than just hamstring which would represent a ‘normal’ response

Beginning with the lower back muscles and joints, working through the glutes, and then through the whole hamstring I guided the patients partner to apply pressure in certain areas where I know the nerve can get restricted around tight muscles, or stiff joints. We found the lower back muscles to be very tight, the piriformis muscle in the glute to be tight, and also a spot just to the outside of the hamstring origin, where the nerve sits was very tight.

I step-by-step guided his partner through a number of treatments to mobilise and release off these structures. Once we had worked through the problematic areas we once again performed the slump test…..symptoms had 90% resolved and the left leg felt the same as the right to perform hamstring stretch.

Reassessing the ‘apparent leg length’ discrepancy revealed that everything had now levelled itself off, as we had worked through the restrictions that were ‘holding’ the pelvis in this position of ‘upslip’. We finally went through a number of stretches, mobility exercises and glute activation exercises that the patient would carry out several times a day to continue to work through independently themselves which he was sent from out catalogue of exercises.

With the issue having only been around for 1-2 weeks we were able to get things to settle, get the restrictions freed off and get the nerve functioning well with little disruption to training. However, had he left it even longer the issue would have become a lot more chronic and could’ve led to further issues.