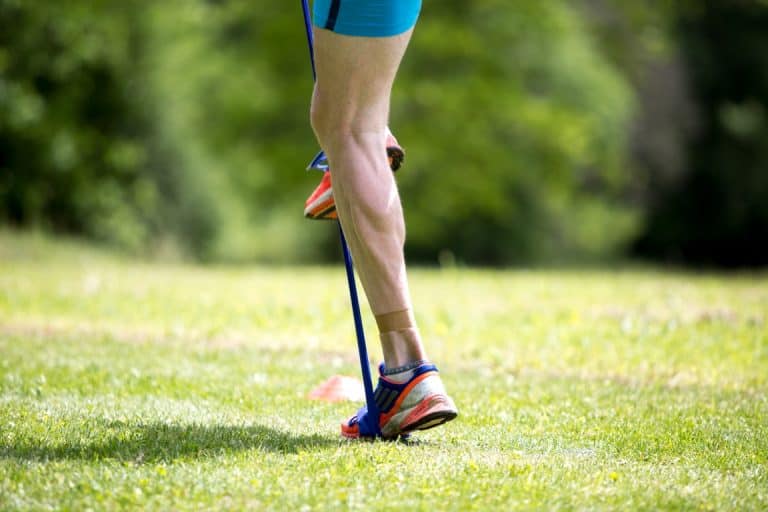 This patient had a 4-5 week history of lower, outer right shin pain. Initially, it felt like a simple tightness in the muscles would ease with some foam rolling and stretching, and not cause too much bother when running.

However, things slowly started to worsen. He started to become aware of the ‘tightness’ the first mile or so of a run, especially when pushing off his toes. It would appear to then loosen off and he would forget about it, however, on finishing it would tighten up again, especially if he was sat for long periods. He then started to develop issues the following morning after running with the first 5-10 minutes walking about being quite uncomfortable and the outer ankle would feel very stiff, and almost ‘creaky’.

There was no pain in the foot, nor did he experience any pain at night or at rest in general.

When discussing past injuries, the patient explained that he had struggled with issues in this area of his shin for several seasons, and had on and off struggled with inner shin troubles as well. He explained he would normally just take a few weeks off, have a bit of ultrasound, and then gradually return to running. However, he explained that this was probably the third or fourth time it had happened now…..

He gets fit, starts upping the intensity and speed work heading into the summer season, and then the issue returns.

Due to the on-going nature of his injuries, the patient had decided he wanted a gait analysis as part of the treatment so prior to our appointment I provided the patient with instructions on how to provide me with the appropriate footage as well as photos of his shoes. He sent this to me before we had our initial Zoom consultation.

The footage was very telling…

But why only the right leg and not the left?

It is often too easy to put it down to a simple too much, too soon scenario. However, I will always go through the simple things with my athletes; training load, footwear, and underfoot conditions.

I will also often discuss diet, recovery strategies and, in female athletes, menstrual cycle patterns, as these can all increase risk of injury, especially if issues are reoccurring.

I initially observed the athlete performing a number of movements, assessing for range, control, and any pain.

There was an obvious knee dropping in pattern, as well as the foot collapsing in, on knee bends. The ankle also felt stiff to the patient, and the knee barely made it over the toes, compared to the left leg which went easily over them and in a much straighter line, over the middle toes.

There was little awareness and feeling of tightness to the single-leg heel raise, and he was not able to raise up as high as on the left. The hops proved more uncomfortable, especially when pushing off.

I then instructed the patient to perform a simple ‘knee to wall’ test which assesses for ankle stiffness. As suspected the right was much stiffer, and tightness was felt in the lower back and also deep in the front of the ankle. 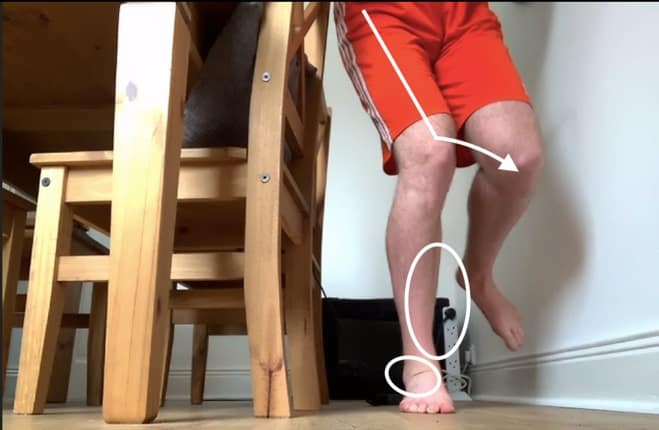 There was good range through the big toe though, which is required to effectively ‘toe-off’ when running. These were two likely contributors to the overall issue.

We then performed a resisted muscle test, using the edge of a wall. The patient simply pushed the outer edge of the foot into the wall (at a variety of angles) to stress the peroneal muscles. Some mild tightness was felt lower down the outer shin, but no specific sharp pain. Similarly, to stretch the muscle, by turning the foot all the way in, a greater stretch was felt on the right but no pain.

There are 2-3 peroneal muscles, all with slightly different points of attachment and functions. To determine which was involved I instructed the patient to perform a number of movements of the foot, whilst he pressed on each individual muscle/tendon. The most uncomfortable spot was roughly 2-3 inches long, starting just above the outer ankle bone. This suggested it was the peroneus brevis muscle. 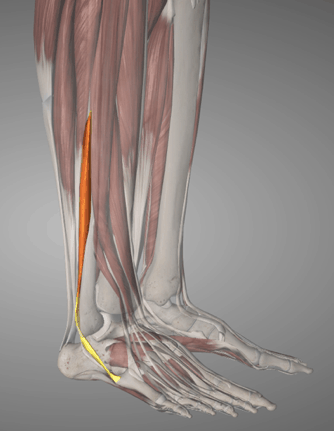 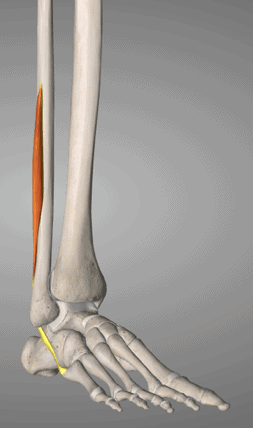 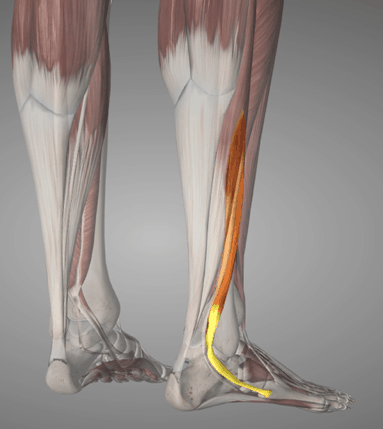 The history of the injury did not suggest a bone issue, but to be safe we ruled this out anyway by getting the patient to poke on a number of bony points to assess for pain. There was no response.

As ever I wanted to assess further up the chain through the hip, back – upper and lower.

The movement of running involves rotations and counter rotations throughout the whole body. The best example is the legs and arms. When you drive the right leg through the left arm swings through, and with this, the upper body rotates to the right.

This is a counter-rotation, and it allows you to effectively propel yourself forwards.

However, problems can arise if there is tightness or restriction in structures from the hip all the way up to the neck. This is why it is essential to always assess further up the chain.

Mobility and flexibility through the hip were good, both sides being equal. Similarly, the lower back was moving well and there was no restriction left or right. However, the upper back was a different story.

To assess I instructed the patient to sit on a chair, arms across chest, and twist their upper body left/right as far as they could. I was looking to see how far they were able to rotate around. You are looking for a smooth, almost ‘S’ shaped curve to the upper back.

The patient was particularly stiff rotating to the right, and the curve in the upper back was not visible.

A reduction in this rotation here will often cause someone to land excessively on the outside of their foot, rather than centrally, or they may ‘over-stride’. This heavy landing on the outside of the foot will of course then lead to an increased load through the peroneal muscles, and eventually, lead to injury.

Initial treatment was a couple of weeks rest, to avoid further irritating of the tendon whilst we worked on the causes of the issue, so still plenty to keep this runner busy.

Local massage to improve mobility and reduce the stiffness through the peroneal tendon.

Upper back stretching and mobility work using a foam roller/tennis ball/chair to get the joints and muscles moving better, allowing greater rotation whilst running.

Strengthening of the outer glute muscles whose role it is to control the position of the pelvis and knee on impact, and stop the knee dropping inwards. This began with some basic glute bridges, clams, and then progress to more dynamic exercises such as a glute pulley type exercise.

Once the mobility had improved through the joints had started to improve, and the basic strength through the gluteals was there we were then able to introduce more functional running type exercises into the program.

Basic lunges initially, getting used to landing with a stable foot rather than on the outside of the foot. This then progressed to a lunge with some upper back rotation to mimic what happens when running, but in a more controlled environment.

Once the control through these movements improved we then began to introduce some running back into the program, accompanied with some specific ‘drills’ such as skips, bounds, high knees into lunges, etc. which allowed the runner to build in the individual elements we had worked on, and long term this will slowly begin to build into the runners new running pattern.

The runner was back to some level of running within 3-4 weeks, and built back up into some quicker running with his training group at around 6-7 weeks, and has since not had any further issues and is feeling a lot stronger, and his previous inner shin pain has not shown itself either.

2-3 times per week he still completes strengthening type work of glutes, core, calves as well as the control and drill type exercises to ensure that issues like this hopefully don’t return. The mobility exercises have now become part of his daily routine and pre-run preparation and are key to keeping especially his upper back moving well when spending long hours at his desk and commuting to work.